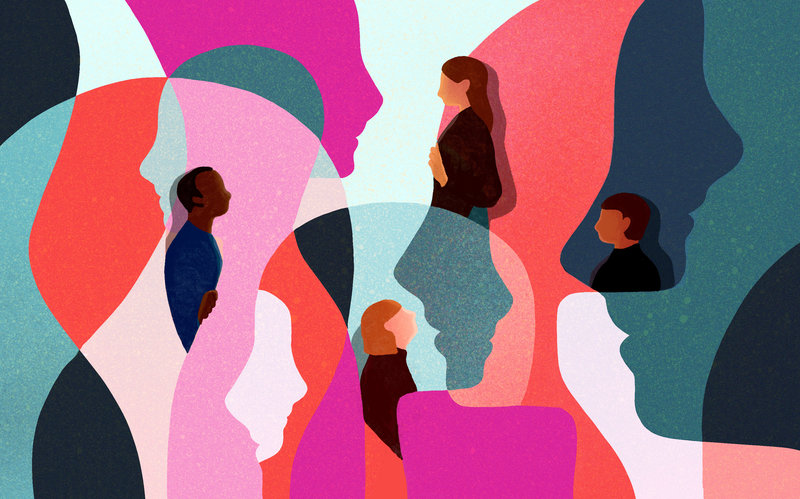 Jews come in/with all shapes, sizes, colors, genders, sexualities, physical abilities, neurodiversities, socioeconomic statuses, and more. There is no one way to be a Jew, so there shouldn’t be one way to “do Jewish”. Here are 5 things you can do to make your Jewish spaces and events more inclusive:

Using inclusive language is a multifaceted issue. We need to consider race, age, gender, sexuality, language, and physical and cognitive circumstances as well as diversity in the Jewish world like denomination, sect, geographical location, and level of observance. The two most common language inclusivity issues in Jewish spaces in the USA concern sect/denomination and gender.

Most Jews in the US are of Ashkenazi (Eastern European diasporic) descent, but it’s important to acknowledge that most Jews in the world are not. When we use a lot of Yiddish slang in our programming, we are erasing Jewish communities (mostly Jews of Color) whose Jewish cultural background is not Ashkenazi. Because Yiddish is an Ashkenazi language and Hebrew applies to Jews from all denominations all over the world, using Hebrew slang instead of Yiddish can be a good way to open your doors to a wider audience. However, making sure to provide translations in the commonly spoken language of your region takes your inclusivity one step further. Many people feel excluded from Jewish spaces when we use words that they don’t understand; instead of expecting that we all have the same educational or cultural background, we acknowledge that not everyone is familiar with the same things.

Using inclusive language also means utilizing gender-neutral terms for lifecycle ceremonies, such as “b’nei mitzvah” — or the new “bet mitzvah” — as opposed to exclusively “bar or bat mitzvah”, “partners” instead of “bride and groom”, and other terms that signify that participation in Jewish life is not contigent on being cisgender and heterosexual. LGBTQ+ Jews have been an open and accepted part of Judaism in the United States since the 1970s, yet there are still so many “inclusive” spaces that use exclusionary, heteronormative language. Simply changing a few words to their gender-neutral synonyms does not detract from the work that we do; it only invites more people to feel like they belong in Jewish spaces. This is not to say that gender-neutrality should replace all gendered language, however there should be a gender-neutral option as often as possible. In fact, contemporary scholars have worked in recent months to develop a fully gender neutral Hebrew grammar structure. For more information on this incredible development in LGBTQ+ Jewish innovation, go to https://www.nonbinaryhebrew.com/.

Accessibility is a multi-faceted issue. Not only do we have to ensure that our physical spaces are equipped to support mobility aids like wheelchairs, canes, and crutches, we also have to acknowledge those whose disabilities are less visible. Simple things like hiring a sign language interpreter, providing presenters with transparent masks or face shields that allow the hearing-impaired to lip read, offering subtitles and/or transcriptions on video and audio presentations, and creating a separate space (either in person or digitally) for those who need a break from a lot of sensory input allows more people to attend events safely and comfortably. It also exposes more people to the idea of different needs in the community and can act as an additional educational aspect for those who may not have considered such a diverse audience.

Although “affordable” is a relative term, there are three key ways to open up funded events to those with fewer resources. The first is to make the event “pay what you can”; with this model, everyone in the community can pay as little or as much as they can afford. The second strategy is to have a set sliding scale cost, making the minimum financial commitment low enough that most folks can afford it. This one can be tricky, because some people may not have an extra $5, even though we assume that they might. The third option is to make events donation-based, meaning that nobody is required to pay but many probably will. In the case of donation-based events, it can be a good idea to reach out to attendees that are guaranteed to have that extra $5 and ask them to donate that little bit more on behalf of low-income folks. With any of these models, the first step is observing and/or surveying the community to find out what they consider to be “affordable” to make sure that the lowest price point isn’t still too high for some members to attend.

4) Stick to What You Know

If you are not confident that you know the historical context and contemporary significance of a cultural or religious symbol, don’t use it. Though you may think that including imagery from other cultural practices signifies inclusion, it only does so when you’re presenting that information from a place of understanding. Otherwise, someone from that culture may see the symbol and think that the space is designed to accept them when in reality, that allyship and acceptance is only performative. It does far less harm to minority communities when we can accept that we don’t know everything, instead of pretending that we do. That said, if you love a symbol or ritual and are willing to learn about it so you can present it respectfully, go for it; the more the merrier!

5) Accept That We All Have More to Learn

If you’re reading this, it’s probably because you consider yourself progressive, inclusive, adaptable, and a lover of diversity. All of those things are excellent qualities, and at the same time it’s important to remember that we each approach everything we do from a unique perspective; our entire lives have brought us to this moment, and the only person who can truly understand that experience is you… and the same goes for everyone else. We can study, research, and engage in meaningful dialogue in an attempt to learn more about our diverse community, but this work is never done. We are all works in progress, so be gracious with yourself and with others. As long as we’re doing the work, we’re on the right path.